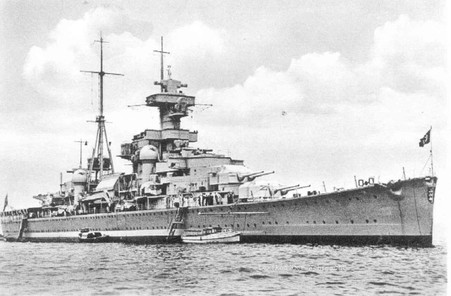 "Battleship D, later called Scharnhorst, was laid down in May 1935 at the Kriegsmarine Shipyard in Wilhelmshaven and commissioned in January 1939. The sister ship Gneisenau (Battleship E) was laid down in March 1935 at the Deutsche Werke in Kiel and commissioned in May 1938. at the Deutsche Werke in Kiel and commissioned in May 1938. It soon got obvious that the straight bow of the ships had to be modified because of the amount of water taken over at high speed. During the war, both ships operated together most time. They did a successful North Atlantic operation, and were the only battleships that sink a operational fleet carrier. After heavy bomb damages, the Gneisenau should get the projected 38 cm guns, but after the battle in the Barents Sea at the end of 1942 all work on major ships was canceled. The original 28 cm guns were used as coastal batteries: Guns of the destroyed Turret Anton were set up as single mounting at the Hook van Holland near Rotterdam, Turret Bruno was installed at Fjett outside of Bergen as Batterie "Fjell" and was cut to scrap in 1968. Turret Cäsar was mounted at Lundahaugen at Austraatt in the mouth of the Trondheimfjord. It is still existing as a museum today".