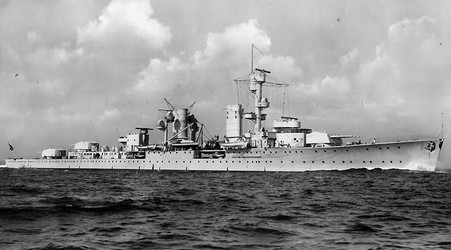 The German light cruiser Karlsruhe - as well as sister ships Konigsberg and Koln - were laid down in 1926. Designed as scout cruisers, their main armament consisted of nine 5.9" guns in three triple turrets, but with an unusual two aft/one forward configuration. It was assumed that a scout ship waslikely be chased, hence six guns aft gave them more  usable firepower.They were also the first German ships to utilize triple turrets. "K" class cruisers were limited to 6,600 tons by the Washington Treaty, and triple turrets made for a shorter (and lighter) design. Electric welding was also used extensively to conserve weight. This attempt at cramming as much ship as possible into a limited displacement was for naught. The resulting hulls were structurally weak and at their stability limits. They were unsuitable for front line deployment. Prior to the outbreak of WW2, they were used as Kriegsmarine training ships, and as such made a number of worldwide training cruises. While cruising off Spain during the Spanish Civil War, the extent of their structural problems became apparent. Thereafter even training cruises were restricted.