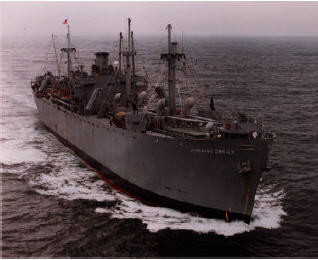 Liberty Ships were a class of cargo ship built during World War II. They were old fashioned, utilitarian vessels that could be built in a hurry. They got the name Liberty Ships because the first one was named the S.S. PATRICK HENRY. Liberty ships were very flexible. In addition to hauling war supplies, some variants were used as tankers, colliers, passenger transports, hospital ships, repair ships,and tank transports.

There are 3 surviving Liberty ships, the Jeremiah O'Brian (pictured here), The John W. Brown, and the Lane Victory.  More information can be found about liberty ships at Project Liberty Ship.