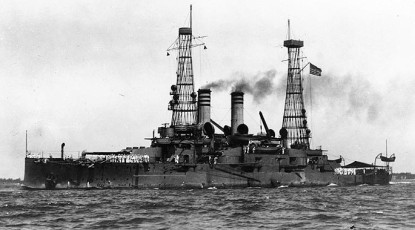 USS Mississippi was first of a class of two 13,000-ton battleships, was built at Philadelphia, Pennsylvania. She was commissioned in February 1908 and spent her first few years of service operating along the U.S. east coast and in the Caribbean area. In addition, in May 1909, the battleship cruised up the Mississippi River to demonstrate contemporary naval technology to the citizens of the south-central United States. In 1914, Mississippi was sold to Greece and renamed Kilkis.  Kilkis served in the Greek Navy until April 1941, when she was sunk by German Dive Bombers at Salamis