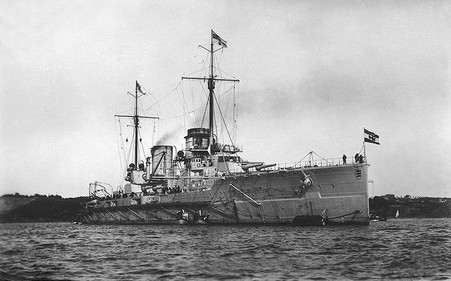 Seydlitz participated in many of the large fleet actions during the First World War, including the battles of Dogger Bank and Jutland in the North Sea. The ship suffered severe damage during both of these engagements; during the Battle of Dogger Bank, a 13.5 in (34.3 cm) shell from the British battlecruiser Lion struck Seydlitz's rearmost turret and nearly caused a magazine explosion that could have destroyed the ship. At the Battle of Jutland she was hit 21 times by heavy caliber shells, one of which penetrated the working chamber of the aft superfiring turret. Although the resulting fire destroyed the turret, the safety measures put in place after the battle of Dogger Bank prevented a worse catastrophe. The ship was also hit by a torpedo during the battle, causing her to take in over 5,300 metric tons of water, and her freeboard was reduced to 2.5 m. She had to be lightened significantly to permit her crossing of the Jade Bar. The ship inflicted severe damage on her British opponents as well; early in the battle, salvos from both Seydlitz and Derfflinger destroyed the battlecruiser Queen Mary in a matter of seconds.