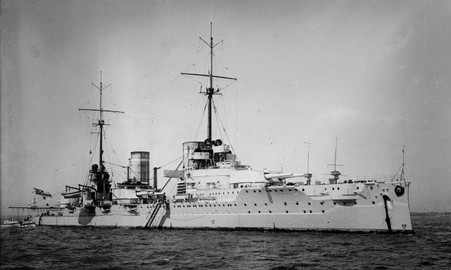 Laid down in 1909 just as HMS Invincible was commissioning, SMS Von der Tann was destined to be the workhorse of the German Scouting Squadron. From the early raids on the East coast of England to Jutland and beyond, SMS Von der Tann was in the thick of the action, accounting well for herself. SMS Von der Tann is credited with sinking the battlecruiser HMS Indefatigable at Jutland in June 1916. But even before her construction was started, the design of her successor had begun - the Moltke-class. The first German battle cruiser and also the first German capital ship with turbine propulsion. Her designers sacrificed heavier armament for greatly increased armour protection, and the "steadfastness" of this ship was very much greater than that of the contemporary British battle cruisers. Designed to replace the unsuccessful "Blucher" armored cruiser that had been built as a reply to the British Invincible class. She was laid down five days after Invincible was commissioned. Altogether a better ship then Invincible.